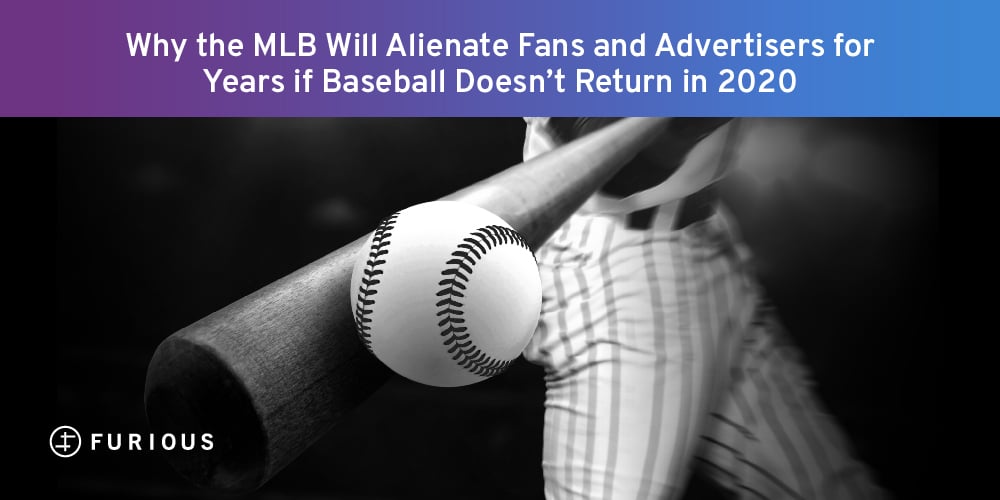 With the pandemic continuing to ravage the world and sports leagues struggling to find ways to play and televise games without fans, the fate of Major League Baseball is still unknown.

Whether professional baseball returns at all this year is up in the air, since owners and the league’s Players Association continue to wrangle over the number and location of games and how to compensate players. As of the second week of June, we have no deal, no timetable and no baseball.

This is bad for fans, bad for advertisers and bad for TV programmers and distributors. Baseball may be teetering on the ledge of an epic fail when it could have been capitalizing on a huge opportunity.

Is MLB Going to Strike Out?

Hello MLB? Your competition in June would have been Bundesliga and NASCAR? No offense to racing fans and German soccer aficionados, but MLB would have been the biggest game in town. It wouldn’t even have been close.

Major League Baseball hasn’t suffered from a work stoppage since the strike of 1994, a year that saw baseball players and owners throw away the season and fail to crown a World Series champion for the first time since World War II. Fans and advertisers were slow to return, and many have never come back. It begs the question of how much damage can be done in 2020.

Baseball has some major challenges even if it does return. Attendance at games has been dropping since 2012, and World Series viewership has been in decline since 2016. (Last year’s World Series was down 1.3% from 2018.)

Still, over 68 million people attended an MLB game last year. And even with declining in-person attendance, plenty of people are still tuning in. Per Nielsen ratings from 2019:

MLB revenue in 2019 was $10.7 billion, which was largely tied to TV deals. A lot is at stake, but which side is going to blink first? It seems that the owners may be content to sit this season out.

What Happens If MLB Sits a Year Out

Here are four things that could—or should—happen if baseball doesn’t return this year:

What will be the lasting image of the 2020 baseball season: a triumphant summer return and an exciting Fall Classic, or a gut-wrenching work stoppage over a few million dollars, all while the NBA, NHL and other leagues have figured it out? If it took three or four years for fans to return in the ‘90s, how long will it take this time?