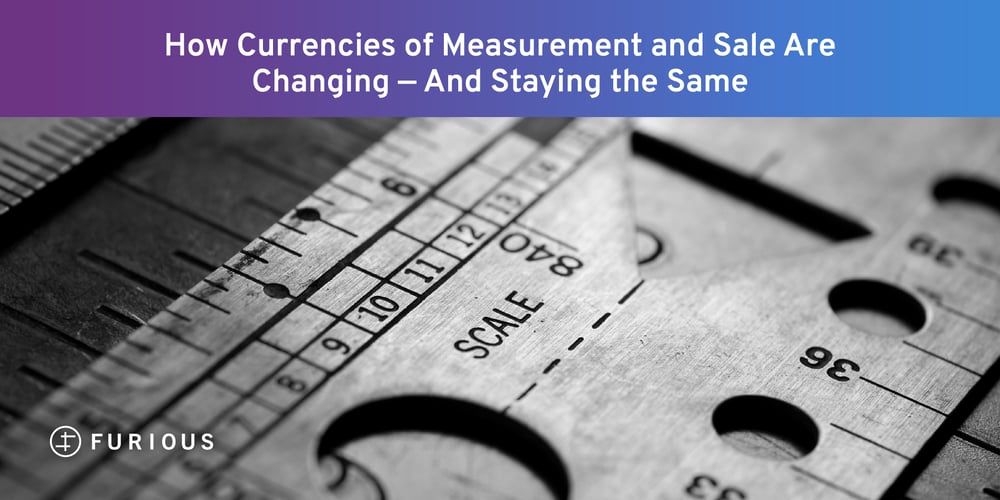 We explore the ways TV has historically been packaged and sold and the effort to establish new currencies in our TV & Video Terms Dictionary, which is designed to spin you up on the current state of TV advertising. It’s grouped thematically around 12 topics, including currencies of measurement and sale, to provide context around all the acronyms and key terms you need to know.

For most of the brief history of TV, advertisers were content with audience-based buying metrics that optimized reach, but digital media has conditioned them to expect more visibility into whom they’re actually reaching. As a result, marketers and media agencies are trying to make use of new technologies to see inside the black box, though these efforts are still mostly aspirational.

The Limitations of Measurement

True cross-platform measurement, for example, is still blocked by technical limitations and privacy concerns — and becoming more so in a cookieless mobile world. Multi-touch attribution modeling, or the practice of estimating how much credit should be assigned to TV and other media channels for sales and conversions in order to reallocate spend in a way that optimizes outcomes, is still effectively the Holy Grail. Automated content recognition (ACR), or technology that reads pixels on internet-connected device screens to reveal what content people are watching and the true reach of ads, requires consumer opt-in, which has slowed adoption. And buying TV commercials on a cost-per-completed-view (CPCV) basis is still a futuristic premise even though it’s commonplace for online video.

Toward the Future Metrics

Brands and media agencies are also pushing sellers to establish performance-based metrics, which would let them measure TV in terms of sales and conversions, but this, too, is currently aspirational. A good example is the notion of a “cost per visit” metric, where advertisers would pay only when their ads result in store visits. The infrastructure to enable this requires a robust device graph to accurately link people’s smart TVs to their phones, as well as technology in retail locations to recognize those phones when they show up on the premises, and it’s just not there yet.

A Tool to Stay on Top of the Industry Terms

To learn more about currencies of measurement and sale and other TV and Video advertising topics, such as the rise of digital video, ad targeting, and distribution and commercial models, access our Dictionary here. We hope that you’ll bookmark the page and revisit it often, since we’ll frequently be adding new terms and definitions.