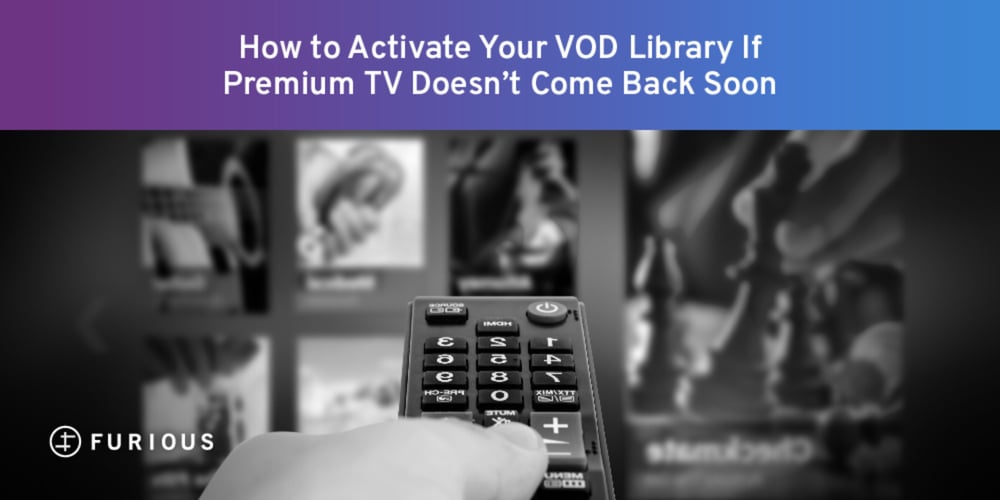 We continue to live in a weird time with high uncertainty. Although it sometimes feels like a semblance of normalcy could be returning, it’s also clear that things can quickly turn the other way.

Likewise, the fate of premium content this fall is still very much unknown. Although studios should theoretically be able to limit access and institute intelligent procedures in order to resume production, one virus carrier can set off a chain of events that puts everything in jeopardy—as we’ve seen with Major League Baseball.

For that reason, content providers need to have a thoughtful plan B. Although networks might be inclined to lean on recent reruns or old standbys like “How I Met Your Mother” or “The Big Bang Theory,” now would be a smart time to look into the extent of your catalog and make more of it available on VOD.

If we’ve learned anything from the streaming wars, it’s that a range of content can have a firm place in the hearts of millions of viewers—from decades-old movies and shows to recent programming with small but intense cult followings. Obtaining VOD rights may be less expensive and easier than airing rights for linear TV content, and there’s no time like the present to start converting traditional linear advertising dollars into digital ones. Given the prevailing uncertainty, going all in on your VOD library is a smart idea.

Here are three steps to get started.

1. Identify Content from Your Catalog with Similar Audiences to Primetime Programming

Anticipating that only a fraction of premium primetime programming will be available this fall, you’ll need to deeply understand why advertisers make the specific choices they do. “It’s highly rated” is the easy answer for why an advertiser invests in a popular show, but “it’s highly rated for the audience I want” is probably what really drives the buy.

With that in mind, look for shows in your catalog that should appeal to those same folks and activate them on your owned and operated digital platforms or in your VOD library. Although the audience numbers won’t match what you would see on linear TV, the one-to-one measurement and more specific targeting allowed in those environments may motivate marketers to spend and help to narrow your revenue gap.

Don’t try to make a one-for-one trade and move an advertiser from a premium program to a catalog one. The optics would be terrible, and it would never work as a practical matter. Instead, leverage your data to identify an assortment of VOD programs that give advertisers roughly the same quality and number of viewers they would have had on primetime. Analyze the catalog to find content that has the right audience mix, and don’t assume that content needs to be hyper-similar for the audience to be attracted.

Let the data lead you; it may surprise you, as it often does. At Furious, we’ve found entire genres of widely overlooked programming (e.g., history documentaries that tend to over-index on women over 35) with incredibly similar audience makeups to primetime programming.

In ordinary times, advertisers would be less keen to see unknown titles on their buy, but, if and when new original programming isn’t available, getting them to experiment will be easier, particularly if there’s audience data to support your conclusion. If you continue with this approach when things are “back to normal,” it can greatly reduce the constraints on your premium inventory and allow you to balance your ad distribution in the long term.

3. Use Your Marketing/Promotion Spots on Linear TV to Get the Word Out

Given how intense the competition for eyeballs is, almost no one will know that your digital or VOD offering exists if you don’t proactively promote it. And that would be a real shame, especially if you’ve already done the legwork of activating dormant content and tidily packaging it for advertisers. If you’ve gone that far, you need to take it one step further and invest in getting the word out. Your marketing/promotion spots are a perfect vehicle for that.

In the event we don’t return to a state resembling 2019 in the near future, the conversation about how to replace high-value programming should start now. With the extent of its untapped revenue potential, your VOD library is an easy win.