More Signal, Less Noise: 4 Predictions of How Media Will Evolve in 2020 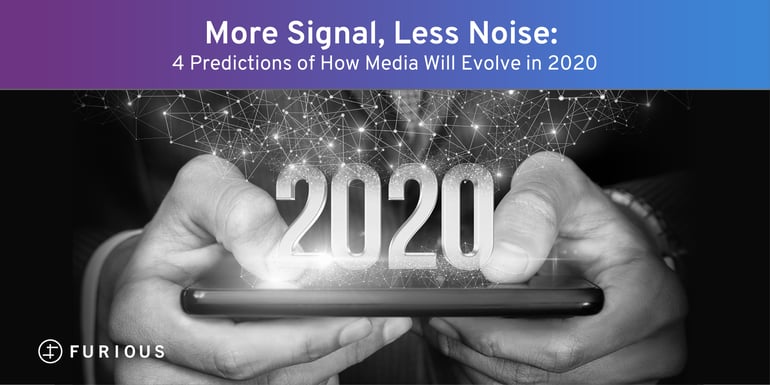 I spent last week in London at the Future of TV Advertising Forum. These were the final days leading up to the election to determine the future of Brexit, and in speaking to British colleagues, I noticed a similar sentiment to what I hear in the U.S. about politics: fatigue. They had lost interest in the outcome and just wanted it to be over.

Fatigue happens as a result of the signal-to-noise ratio steadily dropping in Western societies. We’re subjected to too much noise, making it hard to hear a signal of any kind, whether that’s accurate, objective journalism or a good show amid the sea of programming with which we are inundated. The irony of media today is that we theoretically have all the content we could ever want, but the good stuff is increasingly hard to find.

The problem of too much noise and too little signal can be seen in every part of the media landscape. From programmers and distributors to brands and agencies, every participant in the value chain is trying to find a signal in order to reinvent or transform their businesses.

Here are my four predictions on how the media landscape will evolve in 2020, all in the context of a signal-to-noise ratio that needs improvement.

The OTT landscape changed radically in 2019 because of the push by large media companies to launch their own SVOD services. I predict that next year, the sheer number of OTT services will reach a point of diminishing returns for audiences, which translates into diminishing returns for OTT providers. In other words, there is a point at which “a la carte” will simply become too expensive, and we’re reaching that point.

The irony is that programmers approached OTT as a hedge for decreasing linear TV viewership. However, they grossly neglected the risk of others doing the same, which has resulted in an over-saturation of premium OTT providers.

Simply put: the signal-to-noise ratio in OTT has now gotten so low that it’s hard for audiences to figure out what to subscribe to. Programmers will now have to contend with cross-service cannibalization within OTT itself since consumers won’t be maintaining subscriptions for every SVOD service that comes along.

While candidates have been doubling down on social media in previous election cycles, the signal-to-noise ratio on Facebook, Twitter, and Snapchat makes it increasingly hard for candidates to be heard (not to mention their problems with fake news.) Traditional linear television provides a compelling alternative since TV ads are the only thing on screen for 30 seconds at a time.

This cycle, I predict that local and national candidates will spend larger shares of their budgets on TV, diverting ad dollars from social. Local broadcast and cable, in particular, are well-positioned to reap the benefits.

Every week, we seem to hear of another giant American company being hacked and compromising its customers’ first-party data. Meanwhile, the creepiness of targeted digital ads increases and digital advertising giants continue to behave badly.

The U.S. has taken a cowardly (or perhaps just lazy) approach to dealing with privacy by punting regulation to states, in contrast to the E.U.’s GDPR. Meanwhile, consumers are fatigued by promises of privacy and assurances of data protection while being subjected to creepy ads and data breaches.

I predict that in 2020, people will start demanding clear, transparent and consistent privacy standards implemented by companies that want their personal data as part of a value exchange. They will also expect the government to oversee sound and consistent policies.

4. The Pendulum Will Swing Back Toward Decency

It’s a new decade, and I believe 2020 will be the start of a correction for media. This belief probably comes in part from my own spiritual journey, but many people I respect and admire also believe that the pendulum must and will swing back to decency.

Our world is filled with hate, which manifests in the officials we elect, the violence that fills our news, the use of social media to bully children, and the trolling of women who publicly express their opinions about the actions of men in power.

As members of the media industry, we provide the platforms that enable sexists, bigots, terrorists, trolls, and bullies to have a voice. I’m not suggesting that any group be targeted and lose freedoms upon which democratic societies were founded, but I do believe we need a more balanced ratio of signal to noise. The noise of hate is becoming unbearable, but ultimately our humanity will spur us as an industry to find better ways of harnessing the platforms, experiences and stories we bring to life. We need to work toward providing signals of love, kindness, healing, humanity, and peace that speak louder than hate.

It’s the profound possibilities of our industry that drive me to get up every morning and work toward helping it realize its potential. I suppose, in summary, I predict that 2020 will be a year about purpose: for you, for me, and for all of us.