What Are the Risks of Over-Indexing on Addressable TV? 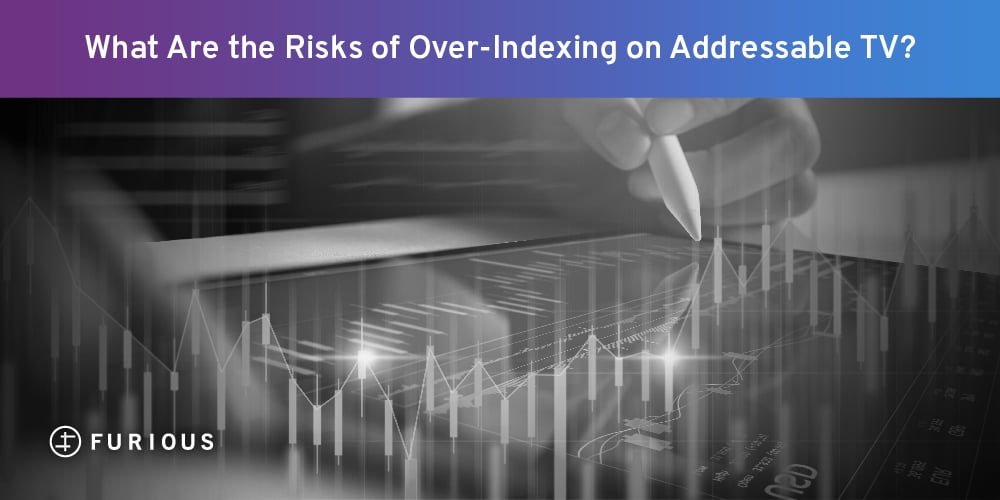 Given the limited supply of addressable inventory and the high value to advertisers of a narrowly defined audience, it follows that many linear TV sellers view addressable as their most valuable inventory and want to sell as much of it as possible. Remember that addressable CPMs can be 10 to 20 times higher than a seller’s effective CPM across the rest of their linear portfolio. Sounds like a win-win/can’t-lose bet, but here’s the catch:

Blindly selling as much addressable as possible may negatively impact the value of your remaining core inventory.

Consider this example: In an effort to sell as much addressable as possible one night, a network ends up selling 20% of total impressions for a primetime spot as addressable. As a result, the other 80% can no longer be sold against a Nielsen guarantee and might have to be reallocated to less valuable inventory types, such as marketing/promotion and direct response. This would result in less overall revenue than if the spot had been kept whole and sold as a traditional linear ad unit.

To be clear, revenue cannibalization isn’t a problem that’s unique to addressable; it can occur under any number of scenarios when sellers fail to implement a yield optimization strategy. Traditional packaging, including selling large “up-front” packages, siphons off chunks of time without accounting for how the value of remaining inventory will be affected.

Why You Must Value Your Portfolio as a Whole

It’s also important to bear in mind that most ad decisioning is rate-rules driven, meaning that impressions are delivered in the available inventory that can fetch the highest price. But persisting with this approach to sales broadly—and addressable specifically—may result in costly mistakes. It puts sellers at risk of cannibalizing other profitable inventory, diminishing the overall value of their portfolio. It may also trigger liabilities for makegoods and increase tension in the buyer-seller relationship.

By chasing the shiny object of addressable TV and trying to optimize locally rather than valuing their portfolio as a whole, sellers may fail to maximize total revenue.

At the same time, buyers have an ever-increasing appetite for audience-based buying, and addressable will have an important place in the linear TV landscape. At Furious, we’re encouraging media sellers to learn how to operate this new product, which has some risks and challenges that will require different thinking, systems and practices to fully reap the benefits.

To learn more about the risks of going all-in on addressable TV and how sellers can ensure that their investment in addressable drives profits, download our addressable playbook here.