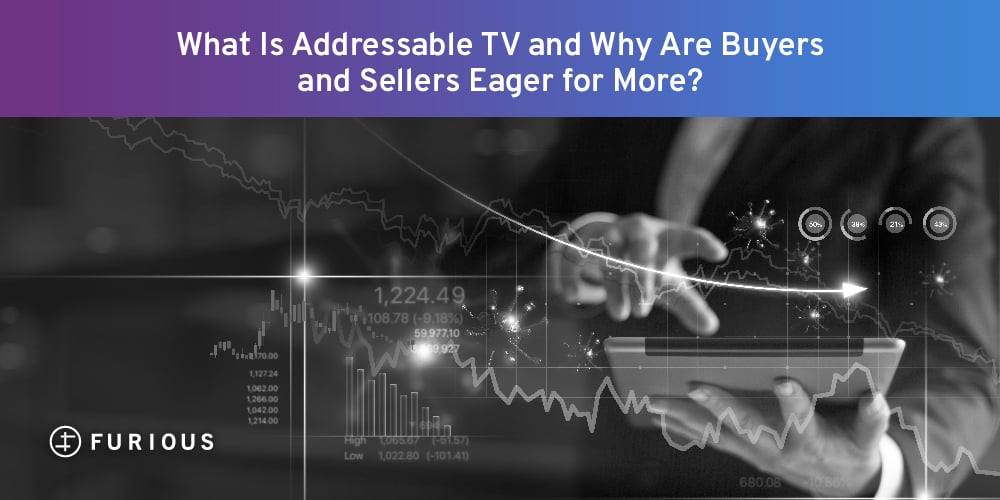 To put it simply, addressable TV advertising makes it possible to deliver different commercials to different households as they watch the same show or live sports event.

The Power of Addressable TV Advertising

Think about the power of that through the lens of an agency buying time for American Express. If the buy were addressable, the agency could leverage three versions of the creative or more. The wealthiest households would see “platinum card” ads, other high-income households would see “gold card” ads and everyone else would see “green card” ads. These audiences have different values to AmEx, and the company would likely be willing to spend much more to reach high-net-worth individuals.

From an advertising seller’s perspective, addressable linear TV advertising is desirable because of tantalizingly high CPMs that can be 10 to 20 times higher than a seller’s effective CPM across the rest of their linear portfolio. Increased targeting precision makes each impression inherently more valuable.

Why Addressable TV Advertising Is in Demand

As a result of these dynamics, addressable has been continually prioritized on sellers’ product and technology roadmaps—even though the envisioned future in which it’s ubiquitous and dominant has yet to arrive. That’s because only cable and satellite operators, such as Comcast and Cox Communications, have the data and technology to enable household-level targeting right now. And those distributors, or MVPDs, are only allotted two minutes of ad time per hour per channel to sell any type of inventory, which can only reach their own subscribers.

Though addressable inventory is limited, demand is high. Brands are willing to pay a premium for addressable because it drives higher ROI by delivering more relevant ads to each viewer. A recent study from the U.K. broadcaster Sky showed that addressable TV boosts ad recall by 49% and cuts channel switching by 48%.

At the same time, the highest-spending national advertisers like Coca-Cola and Pepsi still generally aren’t interested in fragmented “local” addressable spread out across various MVPDs’ subscriber bases; they want their TV buys to have mass reach and for their commercials to be seen everywhere.

Should You Go All-in?

As a result of COVID-19, I expect to see demand for addressable linear TV advertising substantially increase, which may drive addressable CPMs further upward. That’s because we’re likely entering a phase of the pandemic where U.S. states will be reckoning with the virus in totally different ways at any given time; while some states reenter lockdown after a spike in infections, others will be conducting business as usual. As a result, national ad campaigns will become untenable for many advertisers, as this TV[R]EV piece explains, and the ability to reach specific people in specific locations will become more valuable.

While linear TV sellers might be tempted to go all-in on addressable and sell as much of it as they possibly can, that approach puts them at risk of cannibalizing other inventory and diminishing the value of their portfolio as a whole.

To learn more about the promise of addressable TV and why buyers are hungry for it, as well as the risks sellers might incur by over-indexing on this one type of inventory, download our addressable playbook here.

What Are the Risks of Over-Indexing on Addressable TV?