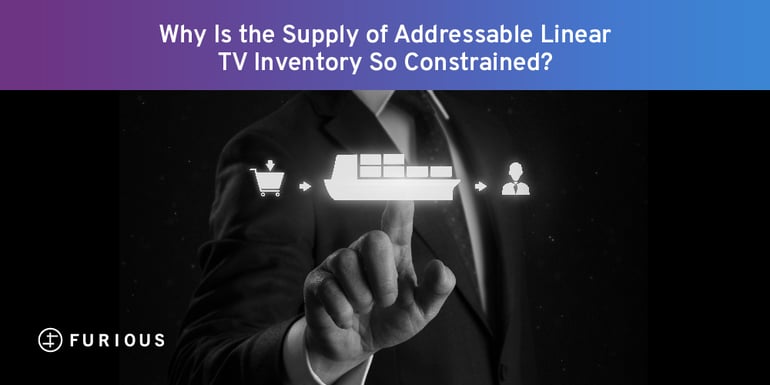 Brands and media buyers want their TV ads to reach specific consumers (think yogurt-eating moms in Duluth, not women between 18 and 54), just as they can do with their digital buys. And sellers with the data and targeting capabilities to offer addressable are eager to sell more of it due to the high CPMs it can command.

So What’s the Problem?

So why is addressable linear TV inventory so constrained? It mostly comes down to infrastructure, though cord-cutting behavior also has an impact.

Per eMarketer, there are approximately 57.6 million U.S. households as of 2021 that have the hardware (i.e., a modern set-top box) to receive addressable ads. Those ads are delivered by cable and satellite operators, such as Comcast, DISH Network, DirecTV and Cox Communications, which have the data and technology to enable household-level targeting. (They can also let advertisers blind-match first-party customer data against their own PII data to reach brands’ existing customers and prospects.) But those distributors, or MVPDs, are only allotted two minutes of ad time per hour per channel to sell any type of inventory, which can only reach their own subscribers.

The number of addressable linear TV households is also shrinking year over year due to cord-cutting behavior. Per eMarketer, the peak number of households (64.8 million) seems to have been reached in 2018, and the number has declined every year since.

Is National Addressable TV in the Future?

Enabling true national addressable TV has been on the agenda for years, but it’s a difficult challenge. Large cable and satellite distributors would need to integrate their technology to provide simultaneous access to their combined subscriber base of roughly 64 million households, which would be an unprecedented degree of collaboration.

If and when those operators enable addressability for national broadcasters and cable networks, both the supply of addressable inventory and the appeal to national advertisers will increase significantly.

To learn more about the promise of addressable TV and how sellers can ensure that their investment in addressable is profitable, download our addressable playbook here.