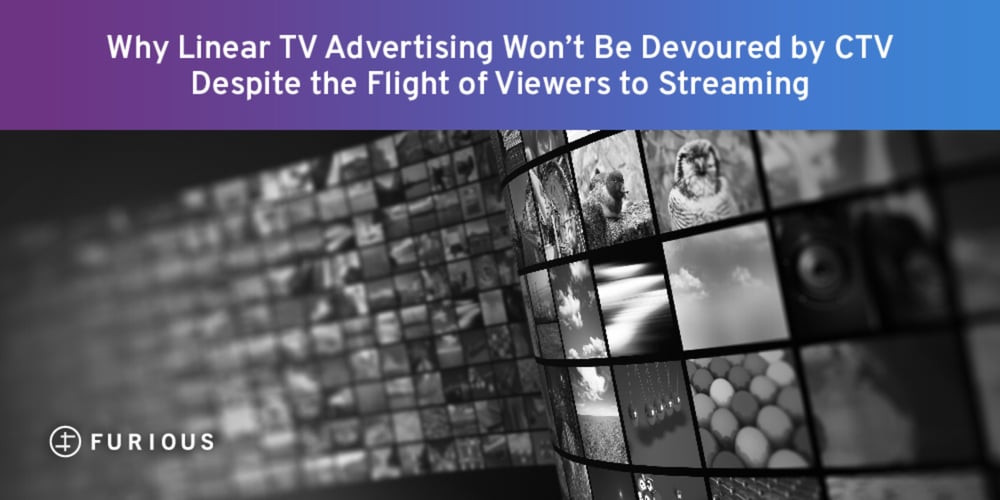 No matter what data source you consult, the flight of TV viewers from traditional linear TV to Netflix, Roku, Hulu, Disney Plus and any number of other VOD platforms is unmistakable. Consider that 40% of adults in U.S. TV households are now watching video on a TV set via a connected device on a daily basis, compared to just 1% in 2010.

Reports are circulating that streaming to TVs has more than doubled during the pandemic because people are spending more time at home. Live sports’ prolonged absence is also a factor here because sports have historically been the main reason not to cut the cord for many cable subscribers. (It remains to be seen what will happen now that sports are returning.)

But viewership trends don’t always neatly track to ad spending, and a Connected TV (CTV) dollar simply isn’t the same as a linear one. (To be clear, CTV is a catch-all phrase for systems that allow people to watch video content via a streaming internet connection. It includes built-in Smart TV interfaces, stand-alone streaming devices such as Roku and Chromecast, connected video game systems and Blu-ray players.)

The question now is what this surge in CTV consumption means for advertising supply and inventory value across linear and VOD channels alike. In my view, the impact of CTV’s surging viewership on linear TV’s standing will be blunted by the lack of maturity and trustworthiness of VOD platforms.

Fraud plagues all digital platforms, and CTV is no exception to that. In fact, what may have been the biggest CTV scam of all time came to light recently. In January, a bot network called ICEBUCKET impersonated more than 2 million people in over 30 countries, generating around 1.9 billion ad requests per day—or 28% of total volume—on programmatic platforms for CTV. According to a White Ops investigation, ICEBUCKET counterfeited more than 300 publishers, tricking advertisers into thinking that real people were seeing their ads.

This kind of fraud doesn’t happen on reliable and brand-safe linear TV. If advertisers can’t be sure they’re getting true viewers from CTV’s growing ad supply, they’ll refuse to allocate additional spending to ad-supported video on demand (AVOD) channels—and for good reason.

It’s also important to remember that CTV is not yet a very effective vehicle for mass reach. For that reason, it’s still of limited interest to global consumer brands, such as Coke and Pepsi, who focus on brand awareness and affinity, not “down funnel” metrics that are supported by CTV’s targeting capabilities. For the most part, AVOD services don’t offer mass reach, and platforms such as Roku and Hulu with larger audiences have significantly higher average CPMs than linear TV. As a result, traditional linear TV still offers the best value for advertisers who care most about tonnage.

As part of the digital advertising ecosystem, with its array of intermediate technologies, CTV imposes a “tax,” which eats into sellers’ net revenue and profit margin. For example, a large amount of CTV inventory is sold in programmatic marketplaces, which take a percentage of the value of every impression sold. Sellers should conduct an ROI analysis to determine whether the higher CPMs from CTV actually yield a better return than linear after accounting for the additional costs and human resources required to plan and deliver CTV.

For “up funnel” marketers, I believe that CTV is most valuable in the short run as a reach extension for linear TV. This is especially true in the COVID era, when big brands and local advertisers alike need sophisticated targeting capabilities to tailor content based on how coronavirus infections are trending and how the economy is impacted on a local basis. After all, restaurant commercials would land badly in cities where restaurants have been ordered to close—as would soda commercials depicting large-group gatherings.

Looking to learn more? Stay up to date on TV and video advertising terms with our TV 101 Dictionary.