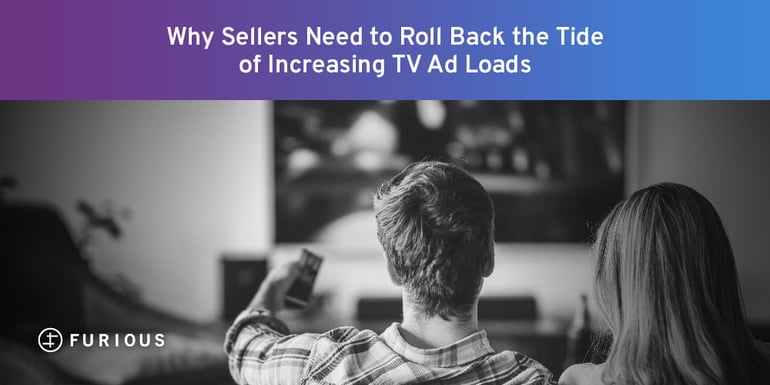 As TV ad loads continue to creep upward, we need to ask ourselves as an industry whether it’s time to roll back the tide.

A Bubble Waiting to Burst

The body of evidence proving this trend is well-established. Take last year’s report by research firm MoffettNathanson, which said that networks averaged 12 minutes and 12 seconds of commercial time in the second quarter of 2019, up from 12 minutes a year prior. Twelve extra seconds representing a less than 2% increase might seem like a blip, but the longer-term trend line is unmistakable. GroupM’s 2018 State of Video report showed that TV ad loads were 11.2 minutes per hour in August of that year, up from 10.9 minutes per hour in August 2017. And a UBS analysis of Nielsen data in 2018 found that cable network ad loads were up 3% year over year on average.

I’d contend that the upward creep of ad loads is detrimental to every player in the TV value chain, including advertisers. An exasperating user experience isn’t a good showcase for any type of advertising, unless the creative is good enough to distract people from their annoyance at a lengthy commercial break—which, needless to say, is a high bar.

At the same time, traditional linear TV sellers have found themselves in a vicious circle. Rising ad loads have hastened the flight of viewers to ad-free streaming services, but the more viewers are lost, the greater the pressure is to increase commercial time to make up for part of the revenue shortfall.

To understand the place we’re in today, it’s useful to reflect on how we got here.

Looking Back to Move Forward

Going back four decades now, the TV industry limited the amount of advertising shown to viewers to 8½ minutes per hour, but it was forced to abandon this self-regulation in 1982. The Department of Justice objected to fixed amounts of advertising on the grounds that broadcast networks were controlling supply in order to drive up price. Commercial time started to expand, though it didn’t snowball overnight. First came infomercials, and then the cable TV industry arrived with lower unit pricing based on more commercials. From there, the broadcast networks coopted the idea of larger ad loads.

Meanwhile, technology evolved to help audiences contend with greater ad loads and, ultimately, skip advertising altogether. Digital video recording devices came along, allowing viewers to record and then replay programs while fast-forwarding through commercials. Then there was TiVo. Today, of course, we have a growing number of subscription-based VOD services, such as Netflix, HBO Max and Disney+, that offer unlimited viewing of ad-free TV and movies. As mentioned, the success of these services has contributed to rising ad loads by putting pressure on traditional TV sellers to find new revenue opportunities.

Perhaps the pendulum is finally starting to swing back. Early on in the pandemic, NBCUniversal’s ad sales chief Linda Yaccarino wrote in a blog post that the company would reduce commercial time across all of its networks to make way for more news and entertainment content. This isn’t the first time that an influential TV executive has promised lower ad loads, but it’s still an auspicious sign.

Instead of ramping up commercial time and hoping that viewers won’t mind enough to flee permanently to Netflix, sellers need to make yield optimization a strategic priority. This means leveraging data science and machine learning to deliver the right inventory at the right time and price to the right viewer, with the goal of increasing overall portfolio value. It’s fundamentally different than the business-as-usual approach of selling every tranche of inventory for the highest price it will fetch—or increasing ad load for that matter. It’s also much more sustainable.

How Data Science Improves Earnings per Share for Media Sellers